Movie review Of "7 Guardians of the Tomb"

With the title of the movie, the verdict of the film was pretty much clear when it was announced, though the producers and director of the movie had tried a lot of the crowd to the theatres by showing some mummy teaser trailers. 7 Guardians of the Tomb is nothing but a shameless flick of James Cameron’s Aliens with little of The Mummy thrown in to put some extra element to it. The film had no spice and excitement as it was too generic and perfunctory in nature that it was difficult to grab the crowd’s attention. The actors and director were not so powerful to stay immersed in the action.

It dispenses with its flashbacks and by watching the film on the silver screen that the businessman Mason (Kelsey Grammer) has sent his one of the best underlinings (Luke as Chun Wu) into the temple of an ancient Chinese Emperor in the search for the amount to the Fountain of Youth. There he finds the Kingdom of the Spiders instead of the mission they were on. Between the story, he loses all the contact and Mason hunts down Luke’s sister, Jia (Li Bingbing) and convinces her to accompany him and others outdoorsman Jack (Kellan Lutz) doing his best Chris Hemsworth impersonation, on their mission. After experiencing a series of misfortunes, they got trapped in an underground labyrinth of tunnels filled to overflowing with poisonous spiders.

Plot point-by-plot point, the movie tracks Aliens so closely (with spiders standing in for the xenomorphs) that it’s possible to believe co-writer/director Kimble Rendall put 7 Guardians together with an Aliens checklist in hand. Strong female lead – check. A “rescue” operation that quickly devolves into an exercise in survival – check. An alpha-type leader who bonds with the strong female lead – check. Nasty creepy crawlies approaching in stealth before attacking en masse – check. Dark corridors everywhere – check. Girl hiding out from the creepy crawlies is taken under the wing of the strong female lead – check. Pissed-off queen lurking in the nesting room for a last-act appearance – check. Back-stabbing supposed ally – check. It’s all there and you don’t have to look too hard to find it. (Sadly, however, we don’t get to hear Li Bingbing shout, “Get away from her, you bitch!”) 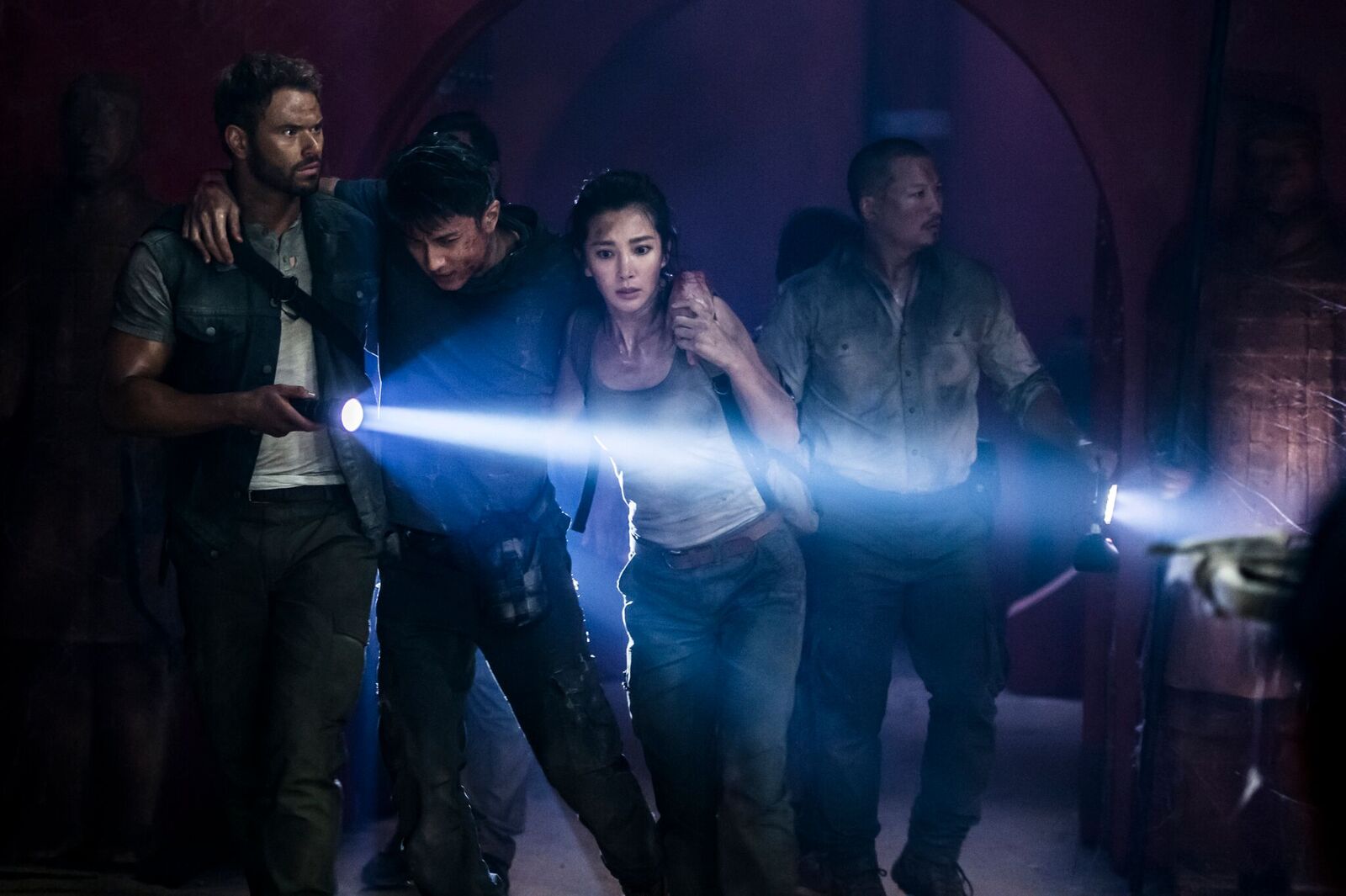 The acting is a mixed bag. The normally charismatic Li Bingbing appears bored by the proceedings and, although her English is fine, she appears more relaxed during the scenes when she’s allowed to speak in Mandarin. Kellen Lutz gets to stand around looking manly and heroic (although his character is scared of spiders). Kelsey Grammer hams it up big time as the human villain – an update of the character Paul Reiser played in Aliens, albeit with a stronger capacity for bombast.

With a relatively short running time, the movie doesn’t stay around long enough to become truly grating. Aspects of the story – such as the horror mandate that forces supposedly intelligent characters into doing incredibly dumb things – are annoying but the special effects are adequate, the set design is strong, and the pacing is on amphetamines. (This keeps boredom at bay but also disallows anything remotely resembling character development.)

The movie feels like what it is – a moderately low-budget action/adventure outing designed primarily for the Asian market. The North American release model is for a few theaters in concert with VOD availability. People with arachnophobia are advised to avoid 7 Guardians of the Tomb because the spiders are creepy. Everyone else is advised to avoid it because, outside of the insects, nothing else is either creepy or compelling. For a better version of pretty much the same story, invest the time in watching Aliens.