Movie Review Of "The Lodgers"

As The Lodgers swings its battered mansion doors open to reveal wood furnishings caked in filth and squalor, director Brian O’Malley intones a familiar Gothic ballad. One that owes Guillermo del Toro a tremendous debt of aesthetic gratitude (Crimson Peak/The Shape Of Water), if only half embraced. Writer David Turpin’s family curse imprisons two opposite-gender siblings about to shed adolescence who are haunted by aquatic ghoulies and empty hallways – like that’s something to complain about? It’s not as if rural 1920’s Ireland stashed away more excitement than gurgling souls who appear after dark – which is made very clear throughout this waterlogged European ghost story.

Rachel (Charlotte Vega) and Edward (Bill Milner) solely inhabit their family’s gated estate. A massive Romanesque dwelling now sits derelict and neglected by two children, captives of a generations-old evil. “Be in bed by midnight, don’t let strangers in and never leave one another” – words Edward wouldn’t dare cross, but Rachel grows tired of being wrongfully punished. She begins to start disobeying warnings, which causes water to rise from the basement earlier and earlier each night. Is a life free of sorrow worth the nightmares she begins to endure? 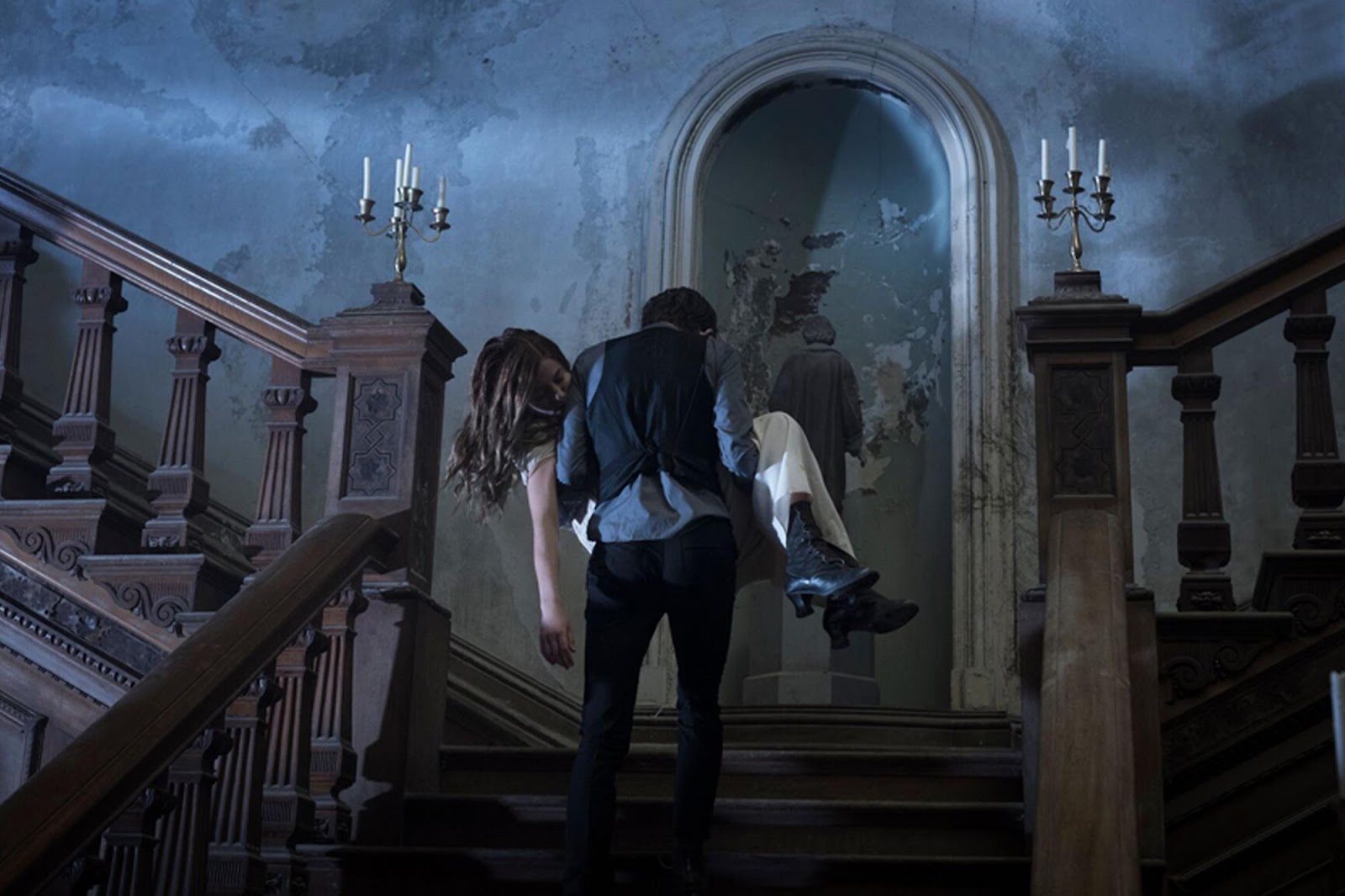 From dreary greyish exterior shots to shadowy gloom splashed about the film’s echoey chambers, The Lodgers never asserts a visual dominance. White blankets cover untouched reaches of Rachel’s kingdom while Edwin lurks under mildew-rotted ceilings like an agoraphobic vampire. Turpin’s scene construction repeatedly races against the clock in recycled fashion, with at most a looming doorway figure or slippery sea creature injected a la A Cure For Wellness in consequence. Camera tricks reverse-drip water and minimal bouts of tension suffocate with bleak density, but O’Malley leans too heavily into antique genre thrills themselves in need of dusting. Period to a yawn.

Characters are merely biding time until finale payoffs dive into the flooded basement where horrors swim (professed assumptions). Rachel is always meant to defy Edward’s shivery paranoia, thanks in part to a peg-legged war vet she pines over (Sean, played by Eugene Simon). The catch? Edward dies if she “attaches” to another man aka escapes – oh yeah. Left turn into brother-lover undertones, yet they’re just that. Whispered hints. The Lodgers leaves so much room for salacious taboo storytelling only to sleepwalk through less interesting quandaries of escape instead. Sean’s schoolboy quarrels with local hooligans and Dessie’s (Moe Dunford) secret forest handjobs, for example. 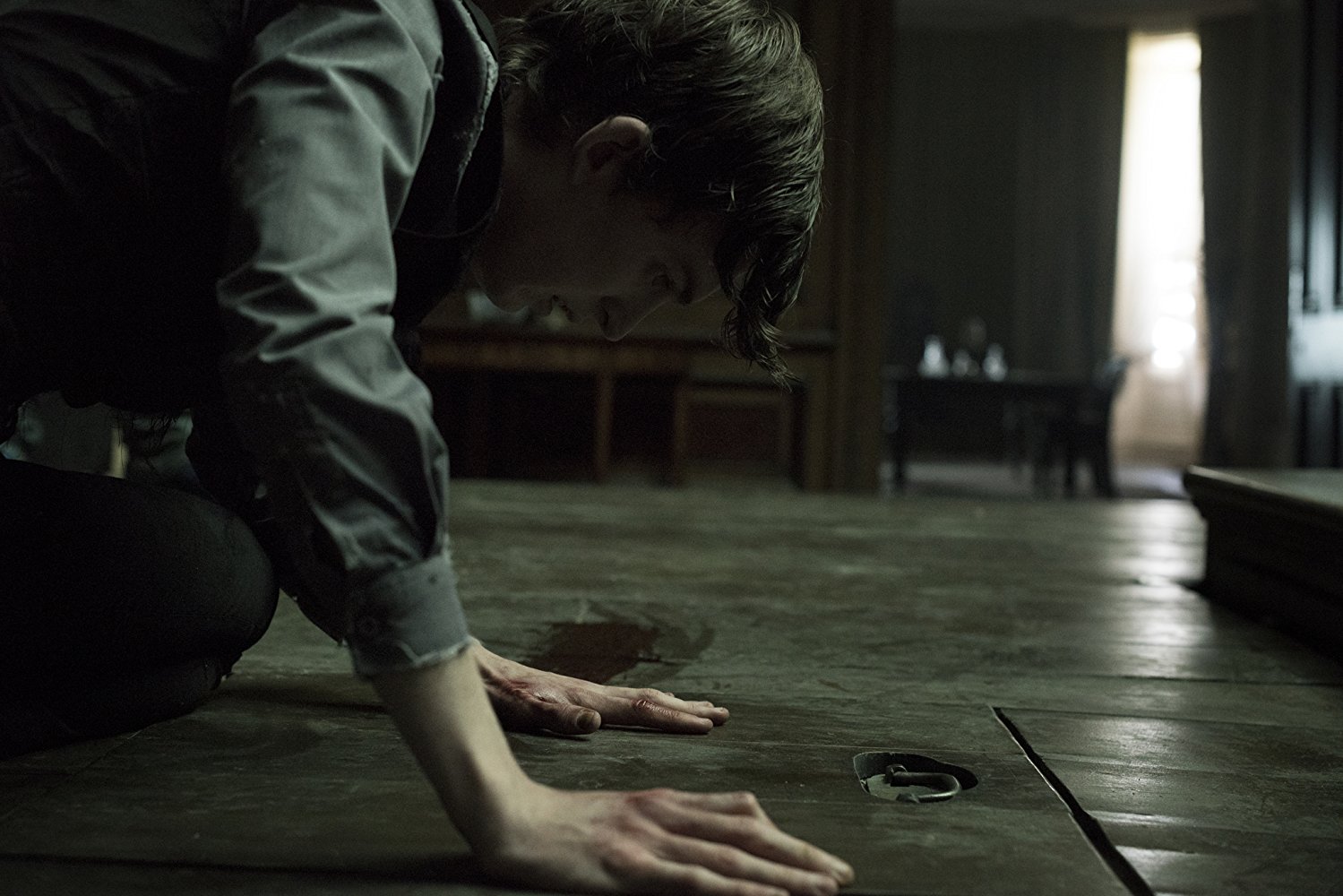 It’s not a disservice to Vega or Milner, who stretch the spectrum of “victim” to “survivor” in their duplicated predicaments. Vega’s Rachel a frustrated romantic with a case of wanderlust who so wants to avoid suicide like the rest of her relatives. Milner’s Edward, whose pale complexion and strict adherence to “Lodgers” rules borderlines the murderous and fanatical. A single financial advisor finds himself victimized by the house’s curse upon his message of depleted trust fund capital, and Sean tries to rescue his Victorian princess as a change of pace (albeit foreseen) – but this is Rachel and Edward’s story. Expected in its differing opinions, reliant on a third act that barely outpaces the preceding sixty-or-so minutes.

At O’Malley’s best, Rachel imagines seeing her and Edward’s corpse hover above the same lake their parents lowered themselves into. Keep a keen eye for liquid saturation, because these watermarks usher the plot’s most intriguing conflicts. Otherwise, forests and heavily-blanketed beds hint at the immoral suggestions Edward’s forfeit embraces – which Rachel never allowed (except for some unconscious tonging). What The Lodgers suggest is ultimately more inviting than the recycled Celtic doldrums displayed on the screen, and by testament, this will not keep pace with everyone’s approval.