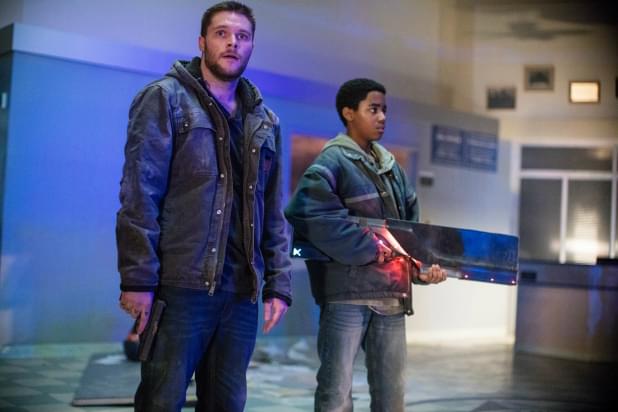 When audiences think about superhero movies, they imagine the typical images– grander than life scenes, otherworldly superpowers, and a whole lot of action. Kin, an action drama film that follows the familial bond between two brothers in possession of an out-of-this-world weapon, strives to push past the classic portrayal of this genre to deliver something deeper. What results is a messy and confusing film that tries far too hard to create emotional connections and, in the end, falls flat.

Kin starts off on a strong note, with dark and almost mystical images of what looks like a post-apocalyptic Detroit. Eli (Myles Truitt) is a 14-year-old African American teen living with his recently widowed adoptive father (Dennis Quaid). Money is tight in the family, and much to his father’s chagrin, Eli spends his days looking for scrap metals in abandoned buildings to sell. On one of these occasions, he comes upon what looks like the aftermath of an alien war and in the process finds a massive weapon with unearthly powers.

The plot becomes unnecessarily complicated with the introduction of its secondary characters. Apart from finding alien bazookas and coping with the loss of his mother, Eli is also faced with the recent release of his brother Jimmy (Jack Reynor) from jail– someone whom he barely knows, but oddly goes on a road trip with after Jimmy has to flee from gang kingpin Taylor (James Franco). Oh, and the aliens whom Eli stole the gun from are chasing the two brothers as well. There’s also Zoë Kravitz’s character Milly, who at best is a clichéd representation of the exotic dancer with loving motherly instincts. 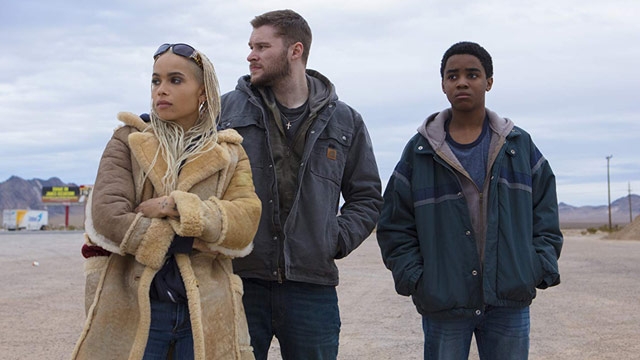 Kin ultimately feels like a film that couldn’t choose what it wanted to be and got lost somewhere in the middle of a gritty indie coming of age flick and an alien superhero movie. The supernatural parts of the film feel more like an add-on, a useless device meant to make the movie more exciting but that doesn’t move the plot forward in any way. Eli doesn’t even take the weapon out until well halfway into the film, and once he does, audiences have almost forgotten it’s there. There’s so much going on with the various plot lines that it’s hard to figure out who or what to care for, yet at the same time, the film feels long and drawn out.

The movie does succeed in its use of strong, and almost beautiful imagery. Kin was produced by the same team that created the series Stranger Things, and it shows. The greyed shots make it feel low budget and intimate, adding some weight to the developing relationship between the two brothers. Yet, where Stranger Things succeeds in enticing audiences with its weird, underground vibe, Kin underwhelms with its wishy-washy identity crisis.