Assassination Nation is built on the premise that we may not have learned our lesson from the Salem witch trials. Also set in Salem, albeit a modernized 21st-century version that’s properly weatherized to allow for skimpy clothing, the film wonders where blame should lie when people lose their privacy in the digital age.

The four barely 18-year-old high school seniors who are the subjects of the movie essentially live dual lives: their everyday “normal” lives and the ones they project to the world via their phones. They are also very aware that they have no privacy and are basically creating online highlight reels of their otherwise mundane existence.

Odessa Young (The Daughter, High Life) plays popular beauty queen Lily, who is “cheating” on her boyfriend with the married father who lives next door. It’s essential for her to keep her photos private, lest numerous lives fall apart.

Hari Nef (Transparent, You) plays Bex, trans-woman hooking up with a handsome football player who insists that nobody, especially his teammates, can ever know about their tryst. Of course, there’s plenty of correspondence between the two via their phones.

They party with their friends Sarah (Suki Waterhouse) and Em (Abra), the token black friend. Despite posting their best moments, some split-screen camera work shows how they have plenty of teary-eyed evenings that go unseen and unheard.

When a phone hack leads to a series of uploads that reveal the town mayor has been hiring male escorts and that a high school principal may or may not be taking lewd pictures of his own daughter, the entire town of Salem goes on high alert. Everyone is next, and nobody is safe from scrutiny when all the private information from people’s phones goes public. 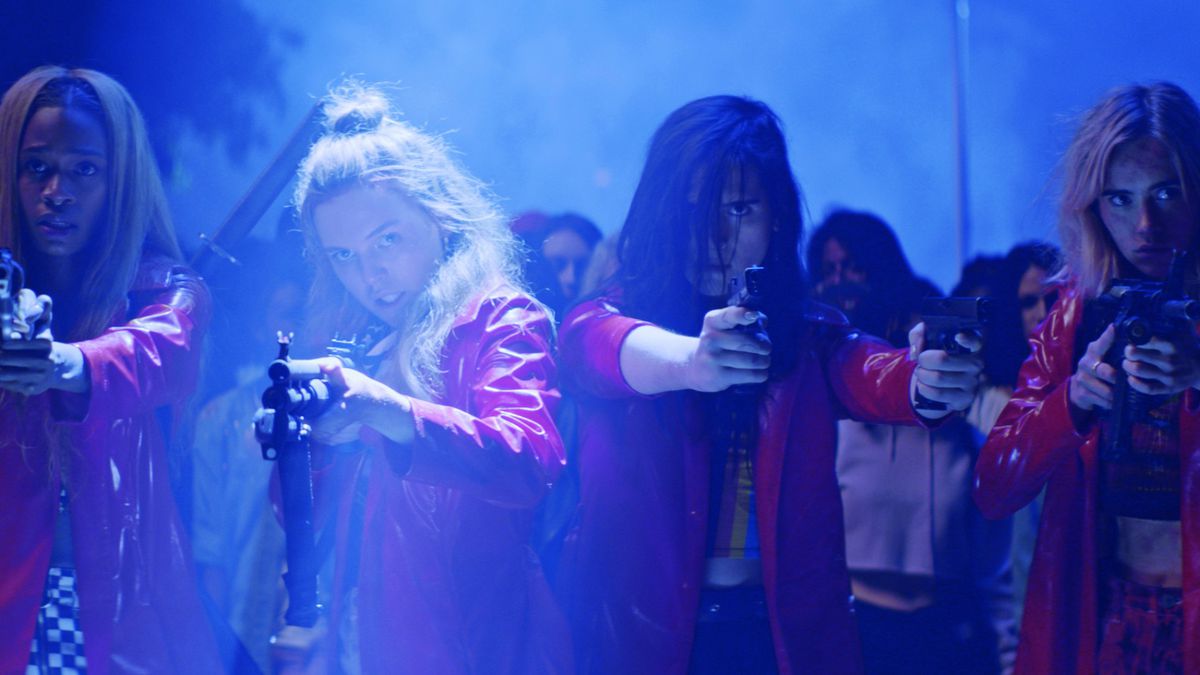 Writer/director Sam Levinson (The Wizard of Lies, Another Happy Day) nails some elements of storytelling. His timing is prescient for the fever-pitched flag-waving mob chanting about locking people up. The town blames the teen girls for failing to keep things private (something which is actually their fault), and for simply committing crude acts in the first place. While Levinson arms his modern Salem “witches” with automatic weapons, he also disarms them by taking away their purpose when they use those weapons to deadly effect in the inevitably bloody conclusion.

Though it boasts four leading ladies and includes monologues that try to explain and defend their feminism, Assassination Nation ultimately exploits the same women it supposedly tries to defend. The film cashes in on politically correct stances, like including a trans-woman, and defending people’s rights to privacy, and subsequently creates horror schlock that unfortunately garbles any honesty in the messages it may have been aiming for.

Assassination Nation takes on too many issues and crumbles under the weight of its ideals. It could have taken a lesson from the much more simplistic The Crucible, which is also based on the Salem witch trials, yet the action and mayhem inflicted on the townspeople speak to what this generation wants to see in a film. In the end, the long list of trigger warnings and their aftermath become the movie, not the lesson contained within. It’s an enjoyable watch for an audience that loves gratuitous, faceless violence as we get with The Purge, but the film missed an opportunity to be something deeper.