As the editor of “Get Out and Happy Death Day”, and the director of Paranormal Activity: The Ghost Dimension, Gregory Plotkin has had plenty of facetime with things that go bump in the night. Now, as editor and director, he brings audiences Hell Fest, a slasher film set in a horror-themed amusement park during Halloween.

In the tradition of the genre, the story follows a band of friends in their college years. The heroine, Natalie (Amy Forsyth), reunites with her friends Brooke (Reign Edwards) and Taylor (Bex Taylor-Klaus), and together, they go to Hell Fest, the titular terror park. Its main attraction is the Deadlands, where thrill-seekers must sign a waiver before entering.

True to the slasher formula, the friends soon encounter the killer—a lumbering man in a mask who wields an ice pick. The problem is that Natalie is the only one who witnesses the first kill, and the killer is camouflaged amongst the other costumed performers.

The rest of the plot unfolds around the theme of discerning between what is fake and what is real. As with many horror films, its concept is rife with potential, though it fails to reach the potential of great classics like Wes Craven’s A Nightmare on Elm Street. The problem is that it doesn’t bother to even hint at any motive for the killer’s bloodlust, nor does it aspire to develop any lore that might keep viewers frightened for more than a split-second jump scare. 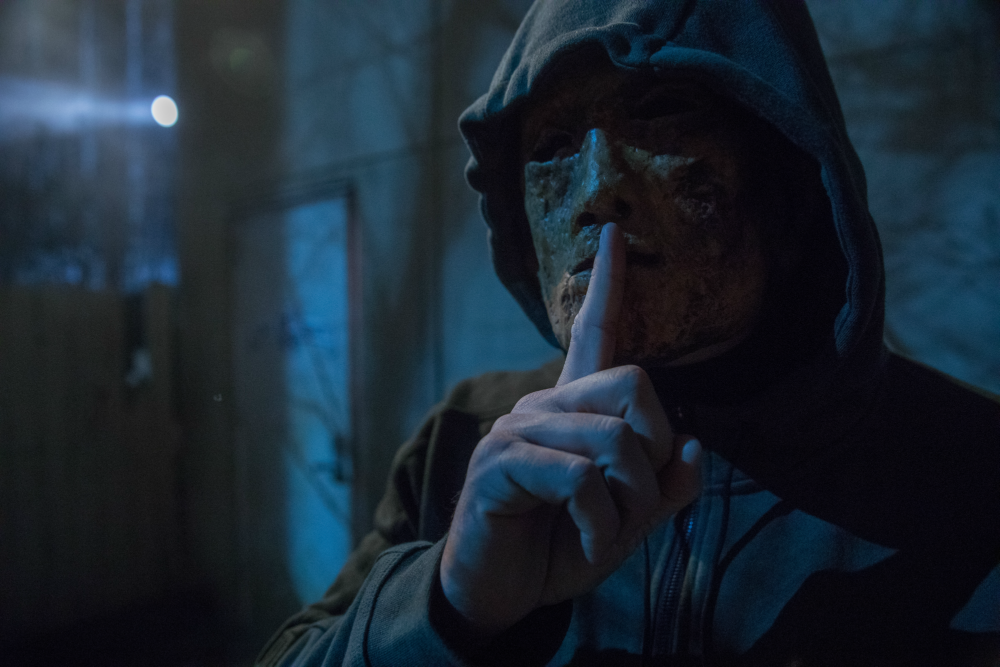 Still, the cast’s performance is perfectly fine. It’s rather good for what you can usually expect from this type of flick. Roby Attal, who plays Natalie’s romantic interest, Gavin, portrays a guileless, awkward boy in a charming fashion. Forsyth helps by playing a straight-arrow well. Taylor-Klaus stands out from the crowd, though, and it isn’t just the fact that she’s the spunky one with short hair. It’s because her cries for help demand the viewer’s attention and send a bolt of urgency into the legs.

Such a strong performance is a surprise, especially considering that the killer really doesn’t do much to elicit the same kind of fear. Sure, there are plenty of nods to popular horror legends: the killer’s dreadful stare is an homage to Michael Myers from John Carpenter’s Halloween franchise, but he isn’t nearly as well-crafted a character. Consider that Michael Myers is distinguished by his white mask and long-bladed knife and that Freddy Kreuger has his green and red-striped jersey and razor-fingered gloves. The killer who stalks his prey during Hell Fest, on the other hand, is seemingly an average man—he wears jeans and a hoodie, of all things. In other words, he has no distinguishing features from which to create an iconic image.

While it’s possible that the point is that the killer could be anyone, he’s not terribly scary. It certainly doesn’t help that the actor’s movements aren’t quite as intimidating as Tony Moran’s physical acting of Michael Myers. The final nail in the coffin is the killer’s humming of “Pop Goes the Weasel”—it’s not exactly creepy, especially not when we hear it muffled through his mask.

On the whole, Hell Fest is an entertaining horror movie, albeit a somewhat tame one that lacks imagination where it really matters. With good pacing and an interesting premise and setting, it is worth watching—but just once, and then never again. The ending does hint at the possibility of future installments. Audiences can only hope, then, that Plotkin will up the ante in the sequels. Until then, slasher film fans will have to reach for the classics for a lasting thrill.