In SKYSCRAPER, Will Sawyer (Dwayne Johnson) is a former FBI hostage rescuer who lost his leg in an explosion. Now married to his surgeon, Sarah (Neve Campbell), and dad to two kids -- twins Georgia (McKenna Roberts) and Henry (Noah Cottrell) -- Will works in security. He hopes to land a job in Hong Kong, for Zhao Long Ji (Chin Han), who's constructed the world's tallest building, "The Pearl." Just as Will determines that the building's fire safety measures work, a band of mercenaries breaks into the building and starts a fire, disabling the security. Will's family wasn't supposed to be there, but they got back early from a trip to the zoo, and now Will must rescue them. But before he can do that, he has to save his daughter from the bad guys.

This action movie has about four gripping sequences of heart-pounding suspense, but they're surrounded by too much ridiculous, ineffective stuff; stressful scenes of kids in peril tip the balance. A cross between The Towering Inferno and Die Hard, Skyscraper is at least a manageable 102 minutes long, but at the same time, it's slow to get going. It spends too much time setting up the plot mechanics - the origin of Will's artificial leg, the gimmick of rebooting a phone, Henry's asthma, etc. and not enough in letting us get to know the characters. 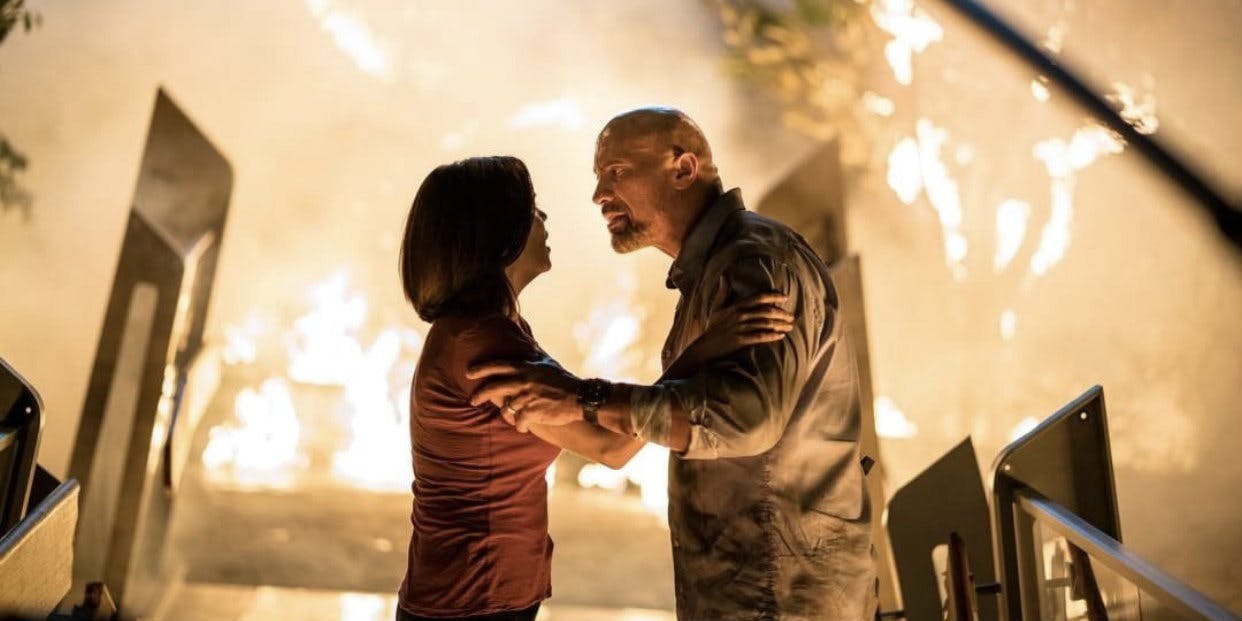 Johnson is a likable enough star, but he's basically superhuman here - far from Bruce Willis' "ordinary guy" in Die Hard and it doesn't feel like much is at stake. Skyscraper goes a little too far in putting Will's kids in jeopardy, but there's never really a question that everything is going to be fine.

The bad guys, including a couple of predictable good-guy turncoats, are bottom-drawer, the kind who simply try to out-cool one another by saying their lines in low rumbles and adding lots of pauses. And it must be noted that the movie has more than a hint of "white savior" syndrome. Viewers willing to slog through the bad stuff to get to the good stuff will likely enjoy the suspenseful moments, but there are far better examples of this kind of movie. Last but certainly not the least, a few strong thrilling scenes couldn’t save the action movie.